U2 Wrap Up Their U.S. Tour At The Mohegan Sun Arena 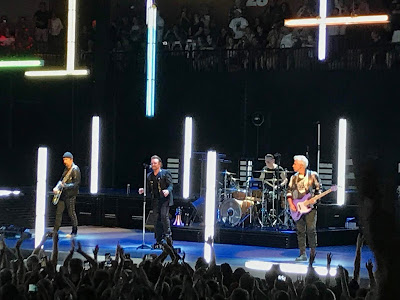 The legendary rock band U2 released their latest album "Songs Of Experience" back in December and quickly announced a 31-date U.S. tour which would carry them across the country. After three months on the road, the band wrapped up their "Experience + Innocence Tour" Wednesday nigh at the Mohegan Sun Arena. It has been over a decade since U2 last played in Connecticut and the anticipation for their return was overwhelming.

As the sold-out crowd slowly filed in to arena, a large video screen, which covered the entire length of the catwalk, displayed images and sayings of positive messages. Then, just past 8:45 p.m., the screen turned to static and lifted up to reveal lead singer, Bono performing the ballad-type opener "Love Is All We Have Left." He would join his bandmates on the main stage to complete the opening trio of new songs "The Blackout" and "Lights Of Home."

The arena erupted during the band's punk-like performance of "I Will Follow" and the rocking chorus "Beautiful Day." Bono sung the autobiographical tales of "Iris (Hold Me Close)" and "Cedarwood Road" with passion and emotion, while The Edge peeled off grunge-like guitar riffs, powering the song's energy. Drummer Larry Mullen Jr. led the march of the "Sunday Bloody Sunday" sing-along as chants of "No More War" rang throughout the arena.

The night continued with the band taking up residence at a smaller, round stage at the end of the catwalk to turn up the energy levels with "Elevation" and "Vertigo." U2 brought the volume down for a moment to perform acoustic versions of "You're The Best Thing About Me" and "Staring At The Sun." before breaking off to different sections of the arena to perform the politically-charged classic "Pride (In The Name Of Love)."

The band closed out their set with the hard-rock attack of "American Soul" and the beautiful sounding, sing-along chorus of "City Of Blinding Lights" as free-standing, neon tubes lit-up the stage. Their encore began with the inspirational ballad "One" as Bono discussed the power of women in this world we live in today. The night finished with a blessing from the band in the form of "13 (There Is A Light)" as Bono freed the last remaining light from a tiny house at the end of the stage. As another chapter of the extensive touring history of U2 comes to a close in Connecticut, another chapter is just around the corner to experience their truthful songs of innocence.

Setlist: Love Is All We Have Left, The Blackout, Lights Of Home, I Will Follow, Gloria, Beautiful Day, The Ocean, Iris (Hold Me Close), Cedarwood Road, Sunday Bloody Sunday, Until The End Of The World, Elevation, Vertigo, Desire, Acrobat, You're The Best Thing About Me, Staring At The Sun, Pride (In The Name Of Love), Get Out Of Your Own Way, American Soul, City Of Blinding Lights
Encore: One, Love Is Bigger Than Anything In Its Way, 13 (There Is A Light)
Posted by JP's Music Blog