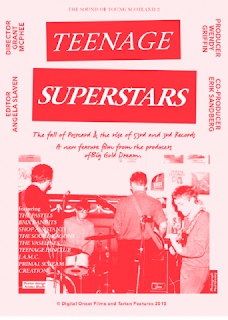 Arriving on U.S. shores is the new U.K. indie-music documentary "Teenage Superstars." The film has been ten years in the making, and digs back into the vaults to reveal the stories behind some of Scotland's biggest bands that invaded the music charts in the eighties and nineties.

Director Grant McPhee interviews many of the artists that were involved in this movement, including members of The Pastels, Jesus & Mary Chain, Soup Dragons and Teenage Fanclub. This film gives you the stories first hand from those involved and how each band admired the other, as they all strived to be better than each other. This documentary is narrated by Kim Deal (The Pixes) and gives the truthful insight into the development and success of bands like the Vaselines, Soup Dragons and Primal Scream. It showcases the drive and passions in these groups with nostalgic live footage of the bands flashing across the screen.

One of the best moments in the film is when Nirvana played the Reading Festival and Eugene Kelly from The Vaselines is called out on stage to sing along with Kurt Cobain. The film was nominated for the "Best Documentary Feature Film" and "Audience Award" at the 2017 Edinburgh International Film Festival. It was released exclusively in the U.S. through TriCoast Entertainment on July 16th through VOD (video on demand). To find out more about the "Teenage Superstars" documentary, please visit facebook.com/teenagesuperstarsfilm.
Posted by JP's Music Blog