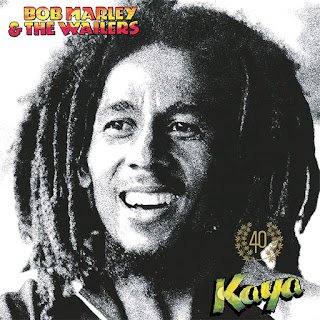 In 1978, Bob Marley & The Wailers released their fifth studio album on the Island/Tuff Gong label. The name of the album was Kaya and included the Bob Marley & The Wailers classic "Is This Love." The celebrate the 40th anniversary of this album, Universal Music is re-releasing the original 1978 mix of the album, along side a new remix of the full album by Bob Marley's son, Stephen Marley. This new version of the "Kaya" was released on August 24th in a number of different formats, including a new 2CD set, a new 2LP set and a digital version of just the Stephen Marley "Kaya 40" mix.

On this album, Bob Marley & The Wailers took a step back from the universal sound of "Exodus," back into the laid back, island vibe of their earlier albums. Fans will finally have the original 1978 mix of the album presented on 180-gram black or special edition green vinyl, but you will certainly discover new aspects of these songs through the "Kaya 40" mixes. Right away, you will notice slight differences in Bob Marley's singing on "Sun Is Shining" as the vocals from the demos were used. A different arrangement in the instrumentation was also used on the classic "Satisfy My Soul" as you get another glimpse into the creation of some of the greatest reggae anthems of all time. Even songs like "Running Away" and "Time Will Tell" hit the goal of showcasing an alternate presentation Bob Marley & The Wailers music, while still holding on to the music's iconic timeless appeal. To find out more about the newly released 40th anniversary of Bob Marley & The Wailers' "Kaya" album and to order your green vinyl version of the album, please visit bobmarley.com.
Posted by JP's Music Blog