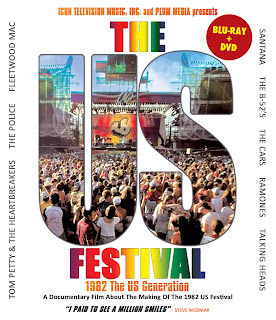 One of the most forgotten festivals in American music history is The US Festival, which took place in 1982. Apple co-founder Steve Wozniak wanted to spend his own money to create a music festival that would take place in California, which would rival Woodstock. After reading a book on everything that went wrong with Woodstock, Wozniak knew he could create the ultimate music festival. A newly released documentary titled "The US Festival: 1982 The US Generation" gives the viewer insight into what exactly went in to putting on a music festival of this size, which was said to feature about 300,000 people.

This new 90-plus minute documentary is filled with footage of the 3-day event, along with recent interviews with many of the people involved with planning a festival of this size. One of the most amazing things that happened, was that an exit ramp off an interstate highway was created specifically for the event so traffic would not get backed up on the highway. Director Glenn Aveni does an outstanding job telling you the stories behind the festival by using the recent interviews of those directly involved, along with some of the musical artists that performed at the event.

One of the different things that you will notice watching this documentary is that it is broken up into chapters that cover different aspects of putting on a rock concert of this magnitude. Many of the artists involved in the US Festival have said that this was the springboard for many of today's music festivals. Everything ran smoothly, considering there were hundreds of thousands of people to take care of. You will also be amazed at the musical line-up that this festival had, which can never be rivaled, including bands like the Ramones, B-52's, The Cars, The Police, Santana, Eddie Money, Tom Petty, Grateful Dead, Fleetwood Mac and many more.

Highlights of the film include performances by headliners like The Police, Tom Petty And The Heartbreakers and Fleetwood Mac as you can almost feel the joy in their performances. I wish that more was shown on the Grateful Dead's set, since they performed at 9am in the morning, probably for the only time in their career. Bonus features on the Blu-ray and DVD feature full interviews with founder Steve Wozniak, The Police drummer Stewart Copeland and Fleetwood Mac drummer Mick Fleetwood. To find out more about "US Festival: 1982 The US Generation" documentary, please visit mvdshop.com.
Posted by JP's Music Blog