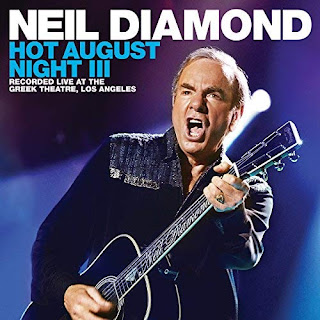 This year marks the 40th anniversary of one of the best-selling live albums of all time, Neil Diamond's "Hot August Night." To celebrate that achievement, Capitol/UMe will release "Hot August Night III" on CD, DVD and Blu-ray. The show features Diamond returning to the Greek Theatre in Los Angeles, CA to perform a nearly two and a half hour show that includes over 30 of the artist's legendary hits.

As the show kicks off with a pair of Diamond's seventies singles ("Soolaimon" & "Beautiful Noise"), you can instantly tell that this night was going to be special. As he cranks up the hits, "Forever In Blue Jeans" and "Cherry Cherry," his fans hang on to his every word as everything aligned to become perfect once again on this hot August night. He sticks with his sixties singles with the fun, swinging rhythm of "Kentucky Woman" and "Solitary Man." Diamond performs and explains about both versions of "I'm A Believer" and how it became a #1 hit for The Monkees.

The second disc begins with the quiet, acoustic ballad "And The Grass Won't Pay No Mind," before rocking out again to "Holly Holy." One of the highlights of the night is Diamond's performance of "Sweet Caroline," which has become a huge sing-along for the audience. He begins his encore with the inspiring song "America" as Neil Diamond will undoubtedly make you feel patriotic. The show closes with the grand build-up of strings for his 1975 single "I've Been This Way Before." To find out more about Neil Diamond and his new release "Hot August Night III," please visit neildiamond.com.
Posted by JP's Music Blog