Phoenix Jordan Explains How "Love Is Heaven, Love Is Hell" On His Debut Release 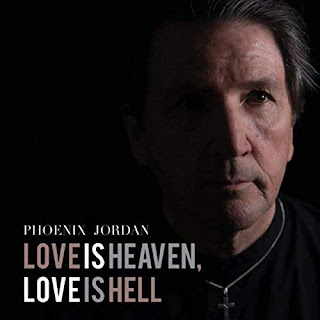 Singer/songwriter Phoenix Jordan is preparing to release his full-length debut album "Love Is Heaven, Love Is Hell" on August 17th. Phoenix hails from Texas, where is early influences were Willie Nelson, Glen Campbell and Ray Charles. His new release tells the stories about the women who have been in his life, from his mother, to his grandmother, to his daughter and his two wives.

The 14-song set begins with the steady flow of "Heaven Every Day" as Phoenix's vocals are warm and inviting as you follow his every word. His music carries a very nostalgic vibe, as in "If You Loved Me," which is hard to find on today's modern country radio. He continues with the gentle, lush cover of "Stardust," before picking the energy back up with the country rocker "No More." He adds a bit of jazz to the slow sway of "Song Of Songs," then sounds a little like Willie Nelson on the ballad "Reasons."

Phoenix Jordan wraps up his new album with the up-beat, swinging rhythm of "So Fresh," the inspirational song "Wind In Your Sails" and the comforting, gospel-like delivery of "I'll See You On The Other Side." Phoenix is also planning on a album releases show on August 18th at the Manchaca United Methodist Church in Manchaca, Texas. For more information on Phoenix Jordan and his new release "Love Is Heaven, Love Is Hell," please visit phoenixjordan.hearnow.com.
Posted by JP's Music Blog