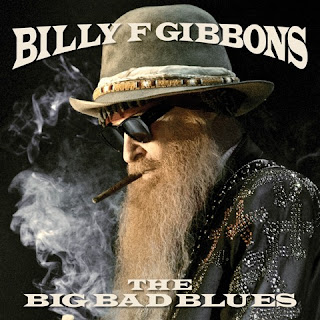 The new album begins with Stillwater's "Missin' Yo' Kissin'," which features the classic ZZ Top boogie that has kept Gibbons going for over 40 years.  The album continues with a pair of originals, "My Baby She Rocks" and "Second Line," as Gibbons finally gave lone-time fans the blues they've been waiting for as his guitar playing is still amazing. The album's second cover song showcases Gibbons' aged vocals that fit perfectly into the Muddy Waters' classic "Standing Around Crying." He shares harmonica duties on this album with James Harman, who blast through his solo on "Bring It To Jerome," before the band return to the shuffle of "Hollywood 151." Billy F Gibbons wraps up his new album with a pair of cover songs, first is Muddy Waters' "Rollin' And Tumblin'," which turns the energy up a notch, and the second is the Latin swing of Bo Diddley's "Crackin' Up."

The album will be released on September 21st, through Concord Records and look for tour dates to follow. To find out more about Billy F Gibbons and his latest release "The Big Bad Blues," please visit billygibbons.com.
Posted by JP's Music Blog