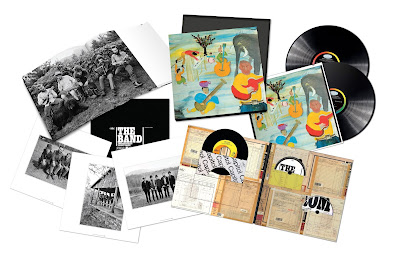 In 1968, The Band released their debut album "Music From Big Pink." It signaled a new chapter in the story of a group that has backed some famous artists like Bob Dylan and Ronnie Hawkins. To celebrate the 50th anniversary of this seminal album, the Universal Music Group has re-released it in a number of different formats, including a super deluxe CD/Blu-ray/2LP/7-inch vinyl box set. Other releases include a limited edition 2LP pink vinyl, as well as a 2LP black vinyl and expanded CD edition of the album.

The idea of the album title, "Music From Big Pink" came about as this was the landmark place where Bob Dylan and The Band rehearsed in the basement (which is also where "The Basement Tapes" were created). The album itself was actually recorded in the studio in New York and Los Angeles, but many of the songs originated in that basement.

This new 50th anniversary release of the album features a newly remixed version of the album, taken from the original four-track analog masters. The music feel more up-front and vibrant as you can easily pull apart each instrument that is being played, especially in the songs, "To Kingdom Come" and "Chest Fever." This album also produced the hit single "The Weight," which includes some very slight additions that have previously been buried in other mixes of the song. You will definitely enjoy Garth Hudson's organ more on this new remixed version of the album, as producer Bob Clearmountain does an amazing job cleaning up the clarity of these songs.

The album's original 11-song list, tacks on an additional 6 bonus tracks. They consist of outtakes and alternate recordings from the "Music From Big Pink" sessions. Songs that were recorded, but did not make the final album, include the funky rhythm of "Yazoo Street Scandal," Dylan's "Long Distance Operator" and The Band's version of the classic blues of "Key To The Highway." The one previously unreleased track in this set is an emotional, a capella version of "I Shall Be Released." This album would be the starting point for The Band, as they made their way to "The Last Waltz," only ten years later. To find out more about this new 50th anniversary release of The Band's "Music From Big Pink," please visit officialtheband.com.
Posted by JP's Music Blog