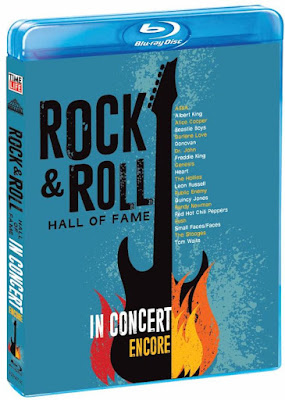 Arriving September 21st is a new set of performances and inductions from the Rock & Roll Hall Of Fame on Blu-ray and DVD. Time Life has gathered together the Hall Of Fame induction ceremonies from 2010, 2011, 2012 & 2013. This new 2-disc Blu-ray or 4-disc DVD set include every induction, acceptance speech and highlight performance from each of those shows. If you are a fan of music, then you will no doubt enjoy all 480 minutes of these videos.

Some of these full-performances were never shown during the show's original broadcasts. The speeches are unedited and uncensored and once again show love for the artists that were inducted during these four years. Highlights includes Rob Zombie and a children's choir (in full Alice Cooper make-up) joining the original Alice Cooper band during their anthem, "School's Out," as well as a hip-hop all-star performance of the Beastie Boys' classics "No Sleep 'Til Brooklyn, So What'cha Want, Sabotage" and members of the Foo Fighters performing the opening of Rush's "2112."

Plus you can enjoy the unforgettable acceptance speeches from the bands, Rush, Red Hot Chili Peppers and Genesis. The quality of these videos are stellar and crystal clear and place you on stage with the artists giving their speeches and performers, as well as in the audience, showing the reactions of fellow artists attending this event. This set titled "Rock & Roll Hall Of Fame In Concert: Encore" takes these four special years from the overall Time Life 25 DVD set "Rock & Roll Hall Of Fame In Concert." You will not be able to watch these speeches and performances without bringing back memories of what made you fall in the with the music that these special artists created during their careers. To find out more about this new release, please visit timelife.com.
Posted by JP's Music Blog