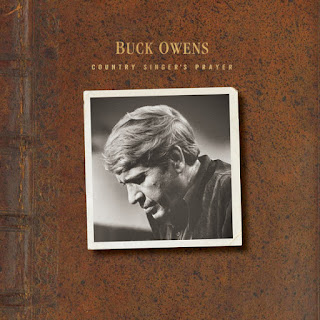 In 1975, famed country singer, Buck Owens recorded an album for Capitol records that has remained in the vaults, until now. The new release titled "Country Singer's Prayer," saw the light of day back on August 17th and was released through Omnivore Recordings, which has done a masterful job with the Buck Owens catalog.

With his contract with Capitol Records winding down at the end of 1975, Buck Owens gathered his backing band, the Buckaroos for one final recording. After the failure of his past album "41st Street Lonely Hearts Club" and the single "Country Singer's Prayer," the label was not ready to pour any more money into Owens' albums, so the recording stayed shelved for more than 40 years. Now we get the full 12-song release, remastered from the master tapes.

The album begins with the up-tempo, swinging rhythm of "John Law," that showed that Buck Owens still had pep in his step. The album continues with the slow, honky-tonk of "Love Don't Make The Bars" and the country-twang of "Drifting Away." He seems to be having fun with his performance of "The Battle Of New Orleans" and proud of his history with the delivery of "California Okie." The new set of songs wraps up with the gospel-like ballad "It's Been A Long, Long Time" and the bonus tracks, "Run Him To The Round House Nellie (You Might Corner Him There)" and "Meanwhile Back At The Ranch." To find out more about Buck Owens' "Country Singer's Prayer," please visit omnivorerecordings.com.