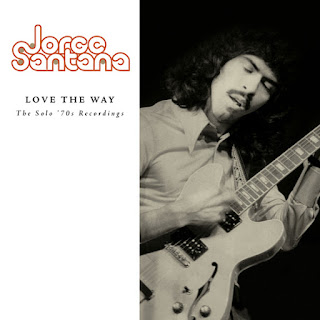 The Omnivore Recordings label is preparing to re-release two solo albums from guitarist/singer Jorge Santana (brother of legendary guitarist Carlos Santana) . Jorge Santana began his recording career as a member of the Latin infused rock and roll band, Malo. They had a top twenty hit single with "Suavecito" in 1972, before Jorge Santana left the band in 1974 to pursue a solo career. Santana's first two solo albums "Jorge Santana" and "It's All About Love" have been remastered with new liner notes for the new CD release "Love The Way: The Solo '70s Recordings."

The first eight songs of this new set features the "Jorge Santana" album, which carried a pop/disco sound. The music was very relevant for the times, but seemed likes worlds away from his days with Malo. Lead singer Richard Bean has the perfect voice for these radio-friendly numbers, with the song "Love The Way" hitting number #54 on the singles chart. Santana only embraced his roots for a moment on the island flair of "Oh! Tengo Suerte," before returning to the disco beats of "Nobody's Perfect." The other seven songs make up the "It's All About Love" album, which continued with the seventies funk vibe of "Three Mile Island" and the R&B ballad "Love Me Tonight." This album was produced by the late, great Allen Toussaint, as Jorge Santana and his band would record three of his songs for this album. To find out more about the newly released "Love The Way: The Solo '70s Recordings" from Jorge Santana, please visit omnivorerecordings.com.
Posted by JP's Music Blog