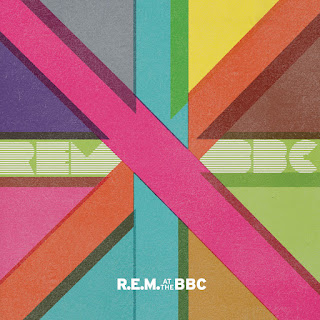 During the 31 year career of R.E.M., the band performed almost a dozen times for the British Broadcasting Corporation (BBC). Now for the first time, Craft Recordings is releasing a super deluxe 8CD/1DVD box set, which captures every single one of those performances.

The first two discs of the set captures R.E.M.'s in studio sessions between 1991 to 2008. The first six songs of the set feels like an extension of the band's "unplugged" performance as you ease into this set with these quieter performances. Then, the band plugs in for the famous John Peel Studio Sessions, which showcases R.E.M.'s harder rock edge ("Lotus") and their poetic ballads ("At My Most Beautiful"). The first disc closes with one of the band's final appearances on the BBC with their intimate acoustic performances of their latest single at the time "Supernatural Superserious" and a cover of the Editors' song, "Munich."
Discs two and three each feature a full performance from R.E.M., including their first live broadcast on the BBC back in 1984. The second half of the 8 CD set includes the band's full live broadcast of their performance at Milton Keynes (two discs) in 1995 and the Glastonbury Festival (two discs) in 1999. The final disc features the invitation-only show at St. James Church back in 2004, which also included a guest appearance by Thom Yorke (Radiohead).
The DVD includes the 60-minute film "Accelerating Backwards" that highlights many of R.E.M.'s appearances on the BBC, along with their complete performance on "Later...with Jools Holland." If the super deluxe box set is a little out of your price range, their is also a 2 CD set and a double-vinyl set. The 2 CD set includes highlights from every performance, including a couple of songs from their appearance on "Later...with Jools Holland," which only appears on the DVD in the super deluxe box set. To find out more about this extensive set, "R.E.M. At The BBC," please visit remhq.com.
Posted by JP's Music Blog