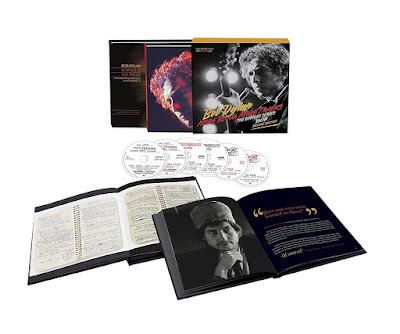 On November 2nd, fans of Bob Dylan's music have finally been able to get their hands on one of the holy grails of Dylan's catalog. I'm talking about the complete sessions of one of his most beloved albums, "Blood On The Tracks." The rumors of this release have been swirling around music forums for the past few years as fans have been wishing and praying for all the recordings being released. Well, their prayers have been answered, as latest volume in the Bob Dylan "Bootleg Series" features almost the complete recordings for his "Blood On The Tracks" album.

The new release titled "More Blood, More Tracks" includes six CDs that follow the development of every song that Dylan worked on for this 1975 album. The set works in chronological order, as you begin with the multiple acoustic solo takes of songs like "If You See Her, Say Hello" and "Lily, Rosemary And The Jack Of Hearts." Listening to the many early takes of these first five songs that Dylan worked on solo in the studio, any of them could have been deemed a final version, they are that good.
On the second disc of the set, Dylan brings in his backing band to help flesh out some of the songs from the first disc. You can follow along with the development of songs like "Simple Twist Of Fate," "Idiot Wind" and "You're Gonna Make Me Lonesome When You Go," as all feature multiple takes. The average Bob Dylan fan may think that having five or six takes of the same song may feel a little redundant, but it allows for the die-hard to examine every step Dylan took with this masterpiece. This disc also includes a couple tries of the outtake "Call Letter Blues," which never made the final album as Dylan abandoned further recordings of that song.
The third, fourth and fifth discs in the set is where Dylan experiments further with the songs as he practices different line-ups, using just the bass, organ or piano. By adding just the slightest touch of an organ and steel guitar to "You're A Big Girl Now," you get a country vibe to the song that started out as quiet poem of reflection. It only took four takes for Dylan to feel comfortable with his love song "Shelter From The Storm," as you can hear him working on the correct tempo of the song's structure.
Bob Dylan seemed most unsettled with the songs "Buckets Of Rain" and "Up To Me" as this set includes multiple versions of these. By listening to these different takes back to back, it allows you to fully appreciate the emotion that Dylan was trying to portray with these songs. Dylan was a perfectionist in the studio and you can understand why as this set allows you to decide for yourself if the best version of the song was chosen for the final "Blood On The Tracks" album.
While the first five discs showcase Dylan's time at A&R Studio in New York in September 1974, the sixth disc of this set features the re-recorded final versions of the songs "Idiot Wind," "You're A Big Girl Now," "Tangled Up In Blue," "Lily, Rosemary And The Jack Of Hearts" and "If You See Her Say Hello." As Dylan felt uncomfortable with the recordings he did in New York, during two separate sessions in his home town of Minneapolis, he abandoned the acoustic versions for a full band. Without the outtakes of the full band sessions included, we can assume that Dylan was pleased with these final versions.
The new Bob Dylan "Bootleg Series, Vol. 14: More Blood, More Tracks" was released in a number of different formats. Along with the six-disc deluxe edition, there is also a single CD addition that gathers the best of the alternate versions in order to re-create the "Blood On The Tracks" album. The same tracks that are featured on the single CD set are also being released as double-vinyl set, as both include a version of the non-album track "Up To Me." To find out more about this amazing new set, please visit bobdylan.com/.
Posted by JP's Music Blog