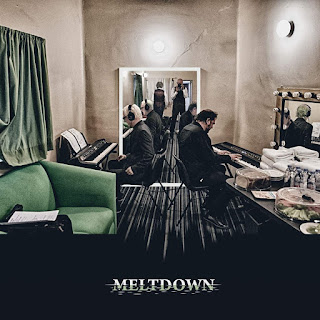 Watching the band, King Crimson perform live and listening to a live recording of the band are two totally different experiences. Luckily, King Crimson's latest live release "Meltdown: King Crimson Live In Mexico" delivers both experiences in a new 3 CD/Blu-ray box set. The three-and-a-half hour audio document is one of the most complete and extensive live releases of the entire King Crimson catalog, delivering 62 songs spread across the four discs.

During the summer of 2017, King Crimson visited Mexico for a handful of special performances at the Teatro Metropolitan, Cuidad de Mexico. One specific show on July 17th was recorded in high-definition, in order to release their first live video document in over six years. This eight-piece band (Robert Fripp, Tony Levin, Mel Collins, Jakko Jakszyk, Bill Rieflin, Pat Mastelotto, Jeremy Stacey, Gavin Harrison) has been considered to be one of the best line-ups during King Crimson's nearly 50 year career, and this live performance certainly solidifies that statement. The band look and sound outstanding as they transition between songs flawlessly, giving the audience a constant flow of music from start to finish.
The video is taken with strategically placed stationary cameras in order to give the feeling of sitting on stage with the band during their performance. You are rarely even shown the audience and every aspect of the show's performance is captured. The use of split screens tries to show you every aspect of the performance as to not miss a single note. For those that may have never seen King Crimson perform live recently, the performers are very stagnant in their positions, with the three drummers located in front and the rest of the band are on an upper ledge, directly behind them. This definitely make for an easier and much more satisfying way to film the performance and enjoy the heart and soul that King Crimson pours into their performance.
The song line-up varies between the three CDs and the Blu-ray, since the video captures one specific two-and-a-half hour performance and the CDs deliver the best and most complete line-up of all their performances in Mexico. The music is just outstanding as King Crimson certainly has perfected their technique in recording live shows, as the music is crisp, clear and in-your-face, as if you were in the front row of the show. The songs that are performed during those six days look to cover King Crimson's entire catalog as you can hear the reaction of the audience when the band dive into classics like "Epitaph," "Easy Money," "Starless" and "In The Court Of The Crimson King." The set also includes half-a-dozen bonus tracks recorded just this past summer from throughout their tour of Europe, including a delicate performance of the rarely performed "Moonchild" and a quick two-minute "Cool Jam."

As long as King Crimson continue to roll out these magnificent live releases (five in the last three years), then their legacy as one of the best progressive rock bands of all time will live on. To find out more about "Meltdown: King Crimson Live in Mexico," please visit dgmlive.com.
Posted by JP's Music Blog