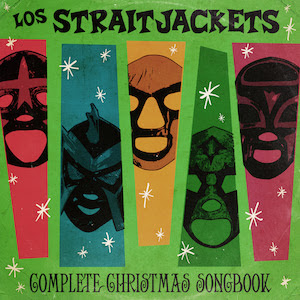 Perfect timing for the holidays, the mask-wearing, surf-rock instrumentalists, Los Straitjackets recently released their new compilation "Complete Christmas Songbook." It features every holiday song the band has recorded in their 30 year career. All 27-tracks have been previously released, beginning with their first holiday album "'Tis The Season For Los Straitjackets" all the way through to their most recent holiday adventure, "Linus & Lucy" taken from a live show with Nick Lowe.

The first 13-tracks make up Los Straitjackets first delivery of Christmas cheer, which dates back to 2002. Songs like the "La Bamba" inspired "Feliz Navidad," the lounge feel of "Rudolph The Red Nosed Reindeer" and the big band swing of "Frosty The Snowman" will fill your speakers with joy. The next 10-tracks were featured on their second full-length holiday album "Yuletide Beat" and the energy and excitement of the season continues with the Dick Dale guitar influence of "We Three Kings" and the power rock ballad "Groovy Old Saint Nick." They inject some R&B flavor into "Joy To The World" and then deliver the jazzy sounds of "Soul'd Lang Syne."
The final four tracks of this new compilation are taken from other releases by the band, including the fun times of "Holiday Twist" and the 2011 limited edition Christmas single "Hark The Herald Angels Sing" with "Silver Bells." Let's not forget the wonderful Los Straitjackets' ska version of "Linus And Lucy," which closes out this new compilation on a high, energetic note. This new release became available on CD (October 19th) and coming soon to vinyl (December 7th). To find out more about Los Straitjackets new holiday compilation "Complete Christmas Songbook," please visit yeproc.11spot.com.
Posted by JP's Music Blog