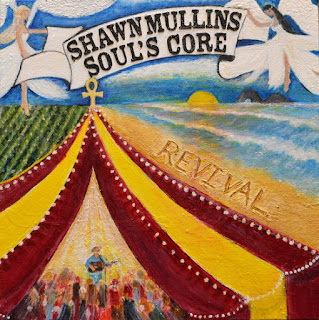 When you are best known by only one album, or even only one song, it may be tough to break away from that, in order for people to see you as an enduring artist. Well, singer/songwriter Shawn Mullins has embraced that type of fame. After a trio of independent releases, Mullins became a staple on the radio with his 1998 hit single "Lullaby." The song was a top ten single around the world and catapulted Mullins into musical superstardom. His album "Soul's Core" reached the top ten here in the U.S. and in the U.K. He would eventually record another five solo albums, with only minor success.

This year marks the 20th anniversary of that special album, and to celebrate, Shawn Mullins recently released a newly recorded version of that special album. The new release titled "Soul's Core Revival" features not one, but two new versions of the album, one electric and one acoustic. Mullins also assembled a brand new band to help breathe new life into his music.
This 2-CD set features the same line-up of songs on each disc that mirrors the album's original release. As you begin to listen to this new recording, you will first notice the deep, slightly more gruff tone to Mullins' vocals, but that adds to the wonderful storied lyrics that he wrote 20 years prior. The experiences heard in his voice give more authenticity to the songs "Twin Rocks, Oregon" and "Soul Child," as you once again warm up to Mullins's iconic sound. His cover of Kris Kristofferson's "Sunday Mornin' Comin' Down" seems to fit in much better on this version of "Soul's Core Revival," as you can feel the emotion in his singing. Let's not forget the two hit songs that came from the "Soul's Core" album, "Lullaby" and "Shimmer," which still have those magical qualities as you once again feel like its 1998 all over again.
The addition of the acoustic disc feels like an episode of the MTV show, "Storytellers," as Shawn Mullins introduces each track with a story. You also get to concentrate more on Shawn's amazing lyrics and hearing the stories will make you listen to these songs in a different light. Plus, having these stripped down versions allows you to notice how timeless the music on this album is. To find out more about Shawn Mullin's "Soul's Core Revival," please visit his Facebook page at facebook.com/pg/ShawnMullinsMusic.
Posted by JP's Music Blog

Shawn Mullins is a master songwriter and storyteller. Add that wonderful, resonant voice to the mix, along with his ability to deliver lyrics with fearless emotion, and you wind up with one of the most compelling artists to be found in Americana.


Like most of his longtime fans, I am a passionate supporter of his entire body of work. It is my hope that this wonderful reboot of a classic record will introduce many more people to this gifted artist.