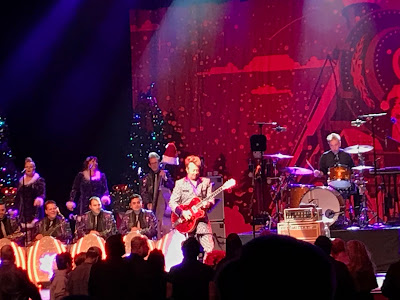 I can't think of a better way to kick off the holiday season, than by checking out the Brian Setzer Orchestra on their "Christmas Rocks!" tour. The rockabilly icon paid a returning visit to the Grand Theater at the Foxwoods Resort & Casino on Friday night, and he brought his 19-piece orchestra along for the ride. Brian Setzer would also rename the venue to "Foxywoods," in order to make the night sound a little more sexy.

The night would blast off with a trio of Christmas hits, including a couple of Setzer reworkings, "Dig That Crazy Santa Claus" and "Gettin' In The Mood (For Christmas)." The night was not only a celebration of the holiday season kicking off, but also Setzer and his orchestra are celebrating their 15th anniversary with this tour.
The Brian Setzer Orchestra then slipped in a couple Stray Cats classics with "Stray Cat Strut" and "Runaway Boys." Setzer showed off his new shiny red guitar (that he got early for Christmas), as he lead the band through a jamming, solo-filled, swinging Christmas version of "Boogie Woogie Santa Claus. Next, it was time for Brian's stellar back-up singers (Julie Setzer and Leslie Spencer) to grab the spotlight with their choral rendition of "Angels We Have Heard On High." 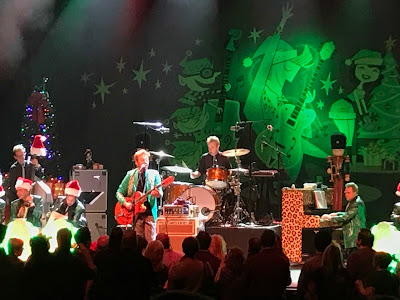 Brian Setzer described the sound of his orchestra as a "Cadillac that just run perfect." He showcased that power by taking the audience to the next level with his cover of the Louis Prima classic "Jump, Jive and Wail." Setzer would also perform others covers that night, including The Beatles' "Hey Bulldog" and the Johnny Cash classic "Ring Of Fire."
The youthful side of Brian Setzer came pouring out as the rockabilly trio of Setzer's longtime bassist Johnny Hatton and drummer Noah Levy came together for an explosion of energy performing the Stray Cats' "Fishnet Stockings." Setzer closed out the set with another Stray Cats classic, "Rock This Town," as everyone was swinging to the rockabilly sound.
After an evening of some Stray Cats, Beatles and Johnny Cash, now it was time for the Brian Setzer Orchestra to cover Tchaikovsky's "The Nutcracker Suite." This nearly eight-minute instrumental was the perfect way for Setzer to re-introduce his stellar orchestra, before closing the evening with the sing-along of "Jingle Bells." As the snow began to fall in the theater, Brian Setzer and his orchestra wished everyone a Merry Christmas by sending them home with memories of these holiday classics.