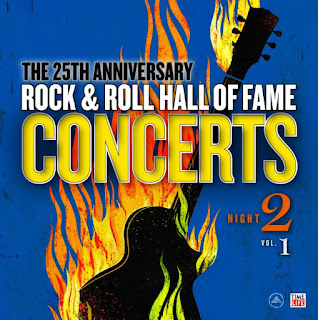 During two nights, almost ten years ago, at Madison Square Garden in New York City was the rock and roll event of a lifetime. The 25th anniversary Rock & Roll Hall of Fame concerts featured dozens of some of the biggest names in music, performing together, on the same stage. This show was originally released on DVD, Blu-ray and CD, and now for the first time on vinyl, but there is a catch. The entire performance is not being released, but only ten magical performance from the second night of performances.

This new 180-gram vinyl LP titled "The 25th Anniversary Rock & Roll Hall Of Fame Concerts: Night 2, Volume 1" begins with one of the innovators of rock and roll music, Jerry Lee Lewis. His solo piano performance of "Great Balls Of Fire," kicks things off on a very high note, only to be follow by Jeff Beck and Sting performing Curtis Mayfield's "People Get Ready." The set continues with Jeff Beck's solo performance of The Beatles' "A Day In The Life," before the muscle of Metallica closes out the first side with their masterpiece "For Whom The Bell Tolls."
Metallica stick around for the beginning of the second side, helping out Ozzy Osbourne with a rocking version of Black Sabbath's "Iron Man," which will surely shake your speakers. The set closes with U2 as the house band, working alongside Bruce Springsteen and Patti Smith performing "Because The Night" and Mick Jagger with Fergie on the classic Rolling Stones single "Gimmie Shelter." This limited edition set was released on October 19th through Time Life.
Posted by JP's Music Blog