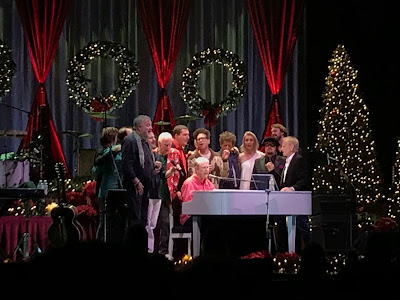 Legendary singer/songwriter and founding member of The Beach Boys, Brian Wilson, along with his 10-piece backing band strolled into the Toyota Oakdale Theatre Saturday night to spread Christmas cheer. He is currently in the midst of his holiday tour, which finds the artist, with fellow Beach Boy, Al Jardine and his band, performing the entire Beach Boys' "Christmas Album."

As the band took their positions, Brian Wilson was helped to his rightful place at center stage, right behind his white piano. The night kicked off with Brian singing lead on the Beach Boys' classic Christmas single "Little Saint Nick." The harmonies of his band are simply amazing, as displayed during the songs "The Man With All The Toys" and "We Three Kings Of Orient Are."
The spotlight was also shared by former Beach Boy, Blondie Chaplin for his performance of "Merry Christmas Baby" and the reggae-infused version of "Blue Christmas." Soulful falsetto singer Rob Bonfiglio laid down a perfect rendition of "I'll Be Home For Christmas," as his Carl Wilson-like vocals were the perfect support for Brian Wilson and Al Jardine's singing.
Jardine would introduce a couple of tracks that were recorded back in the seventies for a Beach Boys Christmas album that was never released, as he sang lead on "Winter Symphony" and Wilson on "Christmas Time Is Here Again." Wilson would also perform a couple of originals ("Christmasey" and "On Christmas Day") from his 2005 solo holiday album.
After a rocking version of "Run Rudolph Run," lead by Blondie Chaplin's guitar work, the music of The Beach Boys would take over, beginning with "Wouldn't It Be Nice" and "Sloop John B." A heartfelt rendition of "God Only Knows," sung by Wilson, and the summer vibe of "Good Vibrations" got the audience standing with applause. They stayed up to dance along to the classics "Help Me Rhonda," "Surfin' U.S.A." and "Fun, Fun, Fun," before settling back down for a beautiful rendition of "White Christmas." The night concluded with everyone, including the opening act, Beats Root Revival, gathering around Wilson's piano for an acapella version of "Auld Lang Syne." With a backing band as amazing as the one, the music of Brian Wilson and The Beach Boys will continue to live on forever.