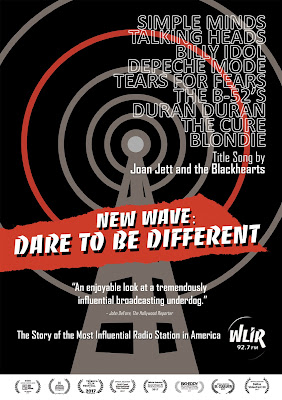 Arriving December 7th on DVD and digital formats is the new documentary "New Wave: Dare To Be Different." The film is about the story of one of the most influential radio stations in America, WLIR in Long Island, NY. While not being able to compete with the country-wide radio stations of its time, WLIR took a risk and starting playing the music of some underground rock bands at the time, like U2, Talking Heads and R.E.M, just to name a few from a long, long list of artists.

Director Ellen Goldfarb uses classic new footage and videos, mixed with recent interviews about everyone praising the radio station, in order to tell a modern story of David vs. Goliath. In 1982, the station changed their format, which switched from playing music by classic pop acts like The Beatles and The Monkees, to music by new wave rockers like Billy Idol and The Pretenders. New interviews with artists like Idol, Thomas Dolby and Dave Wakeling, along with former WLIR DJs explained that their popularity came about by what the BBC was not playing on their radio stations. It allowed for this small radio station to invite the second coming of the British Invasion.
This station was one of the first in the U.S. to play songs by then unknown artists like Blondie, Madonna, Prince and even started to blur the lines between rock, pop and new wave music. Hearing the stories first hand from those who worked at the radio station is priceless. The music that WLIR was playing on the radio started spilling into the club scene in the '80's and life was good for everyone involved, that was until the station was forced to shut down in 1987.
This film is also a great reminder as to how important radio was during the '80's decade and how it help many of today's popular bands break through into the mainstream. To find out more about this new documentary "New Wave: Dare To Be Different," please visit newwavedaretobedifferent.com.
Posted by JP's Music Blog