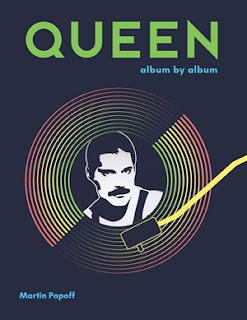 Author Martin Popoff quickly follows up his successful publication, "Iron Maiden: Album By Album" with his latest work, "Queen: Album By Album." With the success of the movie "Bohemian Rhapsody," now is the perfect time for this book to arrive. It follows the same format as the Iron Maiden book, as Popoff begins each chapter with his own assessment of an album, and then works in a round table discussion with fellow music artists, journalists and music pros.

Twisted Sister's Dee Snider does double-duty, by discussing Queen's first two albums, as he showcases his respect and passion for the band's early days. Martin Popoff pulls off the amazing, by getting one of the biggest musical artists on the planet, Sir Paul McCartney to discuss one of Queen's best-selling albums, "A Night At The Opera." While McCartney never followed the band in the seventies, he does give his open opinion as to the production of the album, which feels like a small glimpse into how Queen was able to diverse their sound successfully.
Many of the special guests involved discuss multiple albums in this book, as singer Darius Rucker (Hootie And The Blowfish) spreads his love of one of Queen's miss-hits, "Hot Space." Rucker explains that by being a Queen fan, you were conditioned to expect surprises from this band. Jim Jenkins and Patrick Myers handle the difficult task of discussing Queen's final studio album "Made In Heaven" and what may have went into creating this album following Freddie Mercury's untimely death four years earlier.
This book will certainly shed new light on your views of Queen's classic catalog as you try and absorb all of the information and opinions that these experts give on the music of Queen. This new hardcover book also contains hundreds of photos and promotional items (some never published before) that will help you follow the path of musical royalty known only as Queen. To find out more about "Queen: Album By Album," please visit quartoknows.com.
Posted by JP's Music Blog