Get "Revitalized" With New Remixes Of Billy Idol Classics 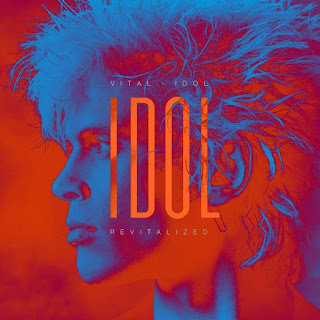 The story goes that when Billy Idol first arrived in the U.S., following the break-up of his punk band, Generation X, he stepped into a club in New York which was playing a dance version of their hit song "Dancing With Myself." Since then, Idol has always been attracted to his songs getting remixed, as displayed within his platinum selling remix set "Vital Idol." With the 30th anniversary of that release arriving last year, Idol though it would be great to update the idea with new remixes of some of his classic hits. But, instead of including the songs of "Vital Idol" along side these new mixes, Captiol Records/UMe released a new set of remixes titled "Vital Idol: Revitalized."

It features 11 brand-new remixes by some of today's top DJs, like Moby, The Chrystal Method and Paul Oakenfold. Fans may find this release a mixed-bag of treats, with highs like RAC's mix of "Dancing With Myself" and Juan Maclean's update of "Catch My Fall," sitting next to near-misses like Moby's mix of "(Do Not) Stand In The Shadows," which includes an unneeded filter on Idol's vocals. One of the odder inclusion on this set is Paul Oakenfold's remix of "One Breath Away" and not because of the mix, which is perfect for the dance clubs, but the fact that it is not a well-known song outside of Billy Idol's fanbase. DJDS gives "To Be A Lover" an entirely different feel, by removing the rockabilly swing of the original song and instead delivers a steady bouncing beat, highlighted by runs of piano keys. This new set closes with a new reworking of "Hot In the City" by Shotgun Mike, which doesn't stand up next to the version from "Vital Idol," but gives it a more laid-back vibe.
The set was originally released back in September on CD and digitally, with the digital version including an extra 4 bonus tracks, like alternative versions of "One Breath Away" and "(Do Not) Stand In The Shadows." But, the true way to hear this set is on the newly released double-vinyl set, which was recently released on November 16th. To find out more about "Vital Idol: Revitalized," please visit billyidol.net/vital-idol-revitalized.
Posted by JP's Music Blog