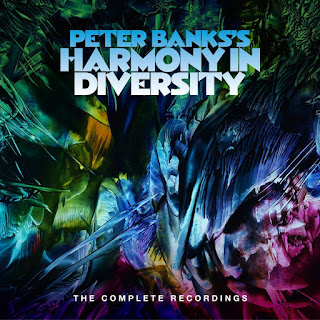 Guitar legend, Peter Banks left us way too early at the age of 65. He was a founding member of the bands YES and Flash, and worked along side fellow musicians Phil Collins, Pete Townshend and Elton John, just to name a few. In honor of the 5th anniversary of his passing, as well as the upcoming 50th anniversary of YES, the Peter Banks Estate released "The Complete Recordings" from Banks' band, Harmony In Diversity.

The new 6-CD set features all of the previously unreleased recordings that Harmony In Diversity made between 2005 to 2007. Only one album from these sessions has been officially released, as we now get over 40 songs that the band recorded in the studio. All of the songs are highlighted by Banks' exceptional guitar work. As soon as you pop in the first disc "Struggles Discontinued," you will not be able to stop listening.
The accompanying 36-page booklet features new write-ups about each disc by fellow band member, Andrew Booker. Disc two of the set titled, "What Is This?" feels especially personal as it only features Booker and Banks on four outstanding instrumentals that will just make your jaw drop. Disc four titled "Hitting The Fans (Live)," showcases the trio of Banks, Booker and bassist, Nick Cottam in a live setting as the disc features highlights from the band performing in concert between 2005-2006.
The final disc in this set showcases the most recent work of Harmony In Diversity (2006-2007) as Andrew Booker was replaced on the drums with Dave Speight. If you haven't already realized what an amazing guitarist Peter Banks was, then this set will prove that fact and then some. Banks was a genius songwriter and composer, as his music always left you with surprise and amazement as you followed him along on his sonic journeys. To find out more about this new 6-CD set, "The Complete Recordings" from Harmony In Diversity, please visit cherryred.co.uk.
Posted by JP's Music Blog