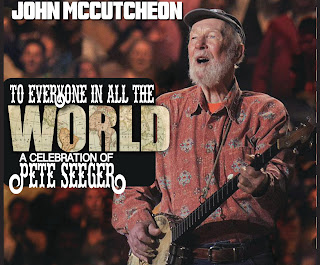 Singer/songwriter John McCutcheon has had a successful musical career that has lasted over five decades. During those years, he has had 6 Grammy nominations, 8 Parents Choice Awards, 5 American Library Association Awards and was inducted into the Wisconsin Music Hall of Fame in 2004. Of his 40+ recordings, his latest album is his most meaningful. It is a tribute to the late-Pete Seeger, who inspired him to become a musician back in 1963.

John McCutcheon will be releasing his new album "To Everyone In All The World: A Celebration Of Pete Seeger" on January 11th, to celebrate what would have been the folk icon's 100th birthday. His new 15-track release has been years in the making as every song that McCutcheon produced was inspired by the work of Pete Seeger.
He begins with the stark, banjo strumming of "Well May The World Go," before picking up the tempo for the country swing of "If I Had A Hammer." McCutcheon add a bit is island flair to  "Guantanamera," then slows down for the emotional delivery of "Sailing Down My Golden River," which also features the beautiful vocals of Suzy Bogguss. John pours some funk onto "Talking Union," as he and Corey Harris delivery the lyrics like hip-hop artists. The album closes with some of Pete Seeger's most well known anthems, a quiet piano version of "Turn, Turn, Turn" and the gentle fragile hymn "How Can I Keep From Singing?" To find out more about John McCutcheon and his latest release "To Everyone In All The World: A Celebration Of Pete Seeger," please visit folkmusic.com.
Posted by JP's Music Blog