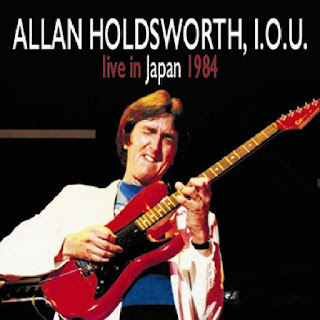 British born guitarist/composer Allan Holdsworth was one of the innovators of jazz fusion, with a career that lasted over four decades. Known for his complex cord progression and intricate solos, Holdsworth has been named as an influence by some of the world's biggest artists like Eddie Van Halen (Van Halen), Alex Lifeson (Rush) and Joe Satriani (Chickenfoot).

On December 7th, Manifesto Records will be releasing the first volume of an ongoing live archive series from Allan Holdsworth. This first release showcases Allan and his band, I.O.U., "Live In Japan 1984." The twelve-song set displays highlights from his first three solo albums, while also introducing tracks from his soon to be released album, "Metal Fatigue." The first 1,000 copies of this new release includes a DVD of the performance, which definitely makes this very worthy, as you are able to watch the master at work.
The CD plays through the entire set, while the DVD intersperses interview segments from Japanese television. The film certainly is not in high definition, given its age, but the close-ups on Allans guitar work is phenomenal, especially on songs like "Panic Station" and "Material Real." The excitement of this release comes together when the entire band locks in and becomes one unit, as in the rocking groove of "Metal Fatigue" and the progressive space rock of "The Things You See (When You Haven't Got Your Gun)." The album closes with "Was There?," which will certainly remind you of how great of an artist Allan Holdsworth was and the power of his band, I.O.U. To find out more about this new release "Live In Japan 1984," please visit manifesto.com/allan-holdsworth.
Posted by JP's Music Blog