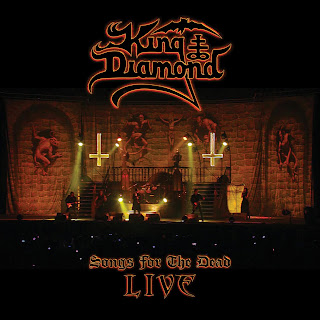 Metal Blade Records is preparing to start the year off with a massive new live release from the legendary metal artist, King Diamond. On January 25th, a new live DVD/Blu-ray titled "Songs For The Dead Live" will become available for fans. It features two full-shows of King Diamond performing at Belgium's Graspop Metal Meeting in 2016 and Philadelphia's Fillmore in 2015. Both shows contain nearly identical set lists, but performed in front of a different audience, from separate countries. The result is two totally different reactions to the music of King Diamond.

Each set contains the band performing King Diamond's 1987 "Abigail" album in its entirety, but before we get to that, the show at Graspop kicks off with the intense delivery of "Welcome Home" and "Sleepless Nights." King Diamond also touches upon his days with Mercyful Fate with the amazing prog-metal delivery of "Melissa" and the heavy-hitting juggernaut "Come To The Sabbath." The second half of the show kicks off with the spoken word introduction of "Funeral," before the grand epic feel of "Arrival" and "The 7th Day Of July 1777" continue the tale of "Abigail." After the nearly 8-minute metal masterpiece "Black Horsemen," King Diamond closes the show with the quiet acoustics of "Insanity."
The recording of the second show was taken from a smaller venue, as the audience seems to play a bigger role in delivering the energy for King Diamond to strive on. The only switch is with the two songs "Eye Of The Witch" and "Halloween," as King Diamond and his band masterfully control the power of the audience's reaction to the songs. The short instrumental "Them" leads to the work of "Abigail," as "A Mansion In Darkness" works the crowd into a frenzy. The thunderous delivery of "Omens" and the swift work of "The Possession" is exactly the perfect remedy to exert all of energy it can from this explosive American audience. To find out more about King Diamond and his new live release "Songs For The Dead Live," please visit kingdiamondcoven.com. 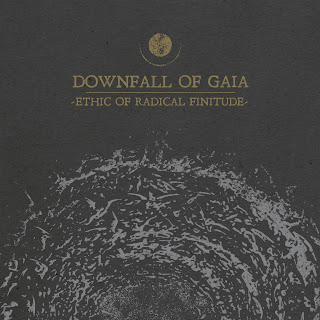 This winter season also brings us the new studio album from hardcore metal giants, Downfall of Gaia. Their new album titled "Ethic Of Radical Finitude" features only six tracks, beginning with the atmospheric introduction of "Seduced By." This quickly gives way to the intense pace of "The Grotesque Illusion Of Being," as you begin to notice a more melodic feel the band's aggressive sound. The middle of this new release peaks with back to back epic numbers, as "We Pursue The Serpent Time" and "Guided Through A Starless Night" deliver new highs for this heavy metal band. Downfall of Gaia finish up their new album with the increasing tempo "Of Withering Violent Leaves," which showcases the band's full musical talents. To find out more about Downfall of Gaia and their latest release "Ethic Of Radical Finitude," please visit their Facebook page at facebook.com/DownfallofGaia.
Posted by JP's Music Blog