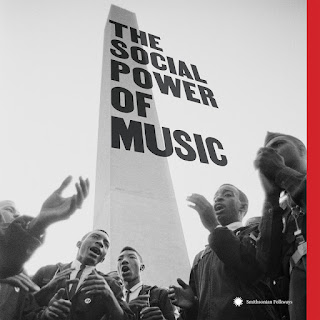 On February 22nd, Smithsonian Folkways Recordings will release a new four disc box set titled "The Social Power Of Music." It features different aspects of folk music, from the fights for civil rights to the religious inspirations to the global effect of folk music. The set begins with many traditional hymns that you may already know, like "We Shall Overcome," "This Land Is Your Land" and "If I Had A Hammer." It includes the original recordings from artists like Woody Guthrie, Pete Seeger, Bobbie McGee and Sammy Walker, who sang about equal rights for all mankind.

The second disc in this set centers around spiritual sing-alongs, like "Amazing Grace" and "Circle Will Be Unbroken." The best quality of these recordings are presented in this set, as you will simply melt into the soulful sounds of "Peace In The Valley" performed by The Paramount Singers. This disc also includes the religious aspects of the Native American culture, as you will hear recordings by The Pembina Chippewa Singers and also Middle Eastern religious hymns.
The mood lightens on the third disc, beginning with the uptempo, swinging rhythm of "Party Down At The Blue Angel Club" from Clifton Chenier and his Red Hot Louisiana Band. The set continues with the blues romp of "Shake Your Moneymaker" and the light-hearted fun of the "Beer-Drinking Polka" and "In Heaven There Is No Beer." The disc gets funky with the dance beats "SAM (Get Down)," before delivering the Native American chant of "Pow Wow Song" and the clap along rhythm of "Mary Mack."
The fourth disc features an even more global presence, as Pete Seeger makes his second appearance on the set with "Viva la Quince Brigada (Long Live The 15th Brigade)." Many of the songs on this disc may not be recognizable and the language unknown, but have the same tone in these songs are the same as many of the early traditional folk gems that have been the backbone to American history. To find out more about this new set from Smithsonian Folkways Recordings, please visit folkways.si.edu.
Posted by JP's Music Blog