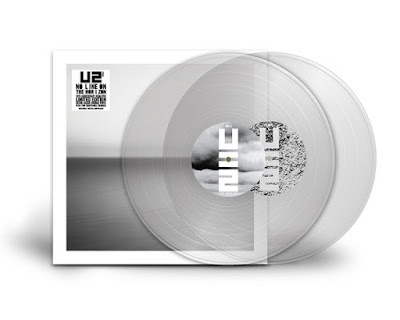 Arriving today, February 22nd is the new remastered double-vinyl release of U2's 2009 album, "No Line On The Horizon." The album produced three hit singles, "Get On Your Boots," "Magnificent" and "I'll Go Crazy If I Don't Go Crazy Tonight." To celebrate the album's 10th anniversary, Universal Music Enterprises in association with Island Records and Interscope decided to remaster the album for vinyl and release it on either clear or black 180-gram double vinyl. The original tracks spread across three sides, with the forth side dedicated to a remix of "Magnificent" done by Pete Tong and Paul Rogers, along with the Redanka "Kick The Darkness" vocal version of "I'll Go Crazy If I Don't Go Crazy Tonight."

As soon as the needle touches the groove of the title song, "No Line On The Horizon," the music comes blasting through your speakers, but with a clarity that can't be beat. Each instrument resides in it own space, as the steady bass line of "Moment Of Surrender" plays a bigger part in the song's overall sound. The Edge's buzzing guitars gives "Get On Your Boots" a grittier tone, while "Stand Up Comedy" feels like a flashback to the band's earlier punk days.
The steady drums of "Fez-Being Born" cuts a clear line through the song, while the gentle touch of guitar is the perfect backdrop to Bono's vocals. The remastering done on this new vinyl release, has become the new peak of performance for all other U2 reissues. The two bonus tracks don't add too much to the album with it's electronic dance beats, but fills out the fourth side nicely.
Included with this set is a 16-page album sized booklet that enlarges many of the fabulous black and white photos by Anton Corbijn that where included with the CD. To find out more about this new remastered double vinyl reissue of U2's "No Line On The Horizon," please visit u2.com.
Posted by JP's Music Blog