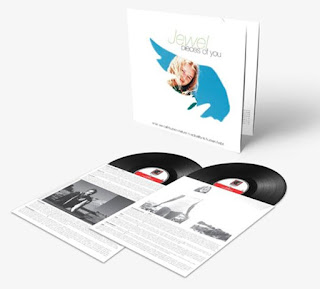 Out today on double-vinyl is the newly reissued debut album "Pieces Of You" from Award-winning, singer/songwriter Jewel. In celebration of the album's 24th anniversary, Craft Recordings has remastered the album in order to receive the highest quality possible. This new double-vinyl release also includes five bonus tracks that were originally featured as B-sides and if you are looking for a little more, Barnes & Noble has an exclusive blue vinyl version of this new release.

This album projected Jewel into the spotlight with here angelic vocals, as she is mostly backed only by an acoustic guitar or piano. It reached #4 on the Billboard album chart and produced three top ten singles, but that is not where the album really shines. Her truthful lyrics are fill with emotion, as Jewel dealt with prejudice ("Pieces Of You"), relationships ("Foolish Games") and abuse ("Daddy"). The album begins with the jazzy-pop aspects of "Who Will Save Your Soul," then peaks with the gentle, seven-minute story of "Adrian," before closing with the final plea of "Amen."
This new double-vinyl release features newly cut lacquers supplied by Chris Bellman from Bernie Grundman Mastering. The sound on these new LPs is simply beautiful. Jewel's vocals leap out of your speakers, as her voice becomes even more of the focus of these songs. The strings in "Painters" and the harmonies of "Angel Standing By" are much more clear and bright on this new release, but the real treasure is the addition of the five bonus tracks.
Side four of this double-vinyl is where these extra tracks reside, beginning with the warm, acoustic folk strumming of "Emily," which was originally featured in "The Crossing Guard" movie. All of the bonus tracks did not appear on the original CD of the album, so that is a major plus to have them all together in one set. These songs also showcase some of Jewel's more light-hearted side with the fun, quicker paces of "Rocker Girl" and "Cold Song," before closing with the ballad "Angel Needs A Ride." To find out more about this newly released double-vinyl version of Jewel's debut album "Pieces Of Me," please visit craftrecordings.com.
Posted by JP's Music Blog