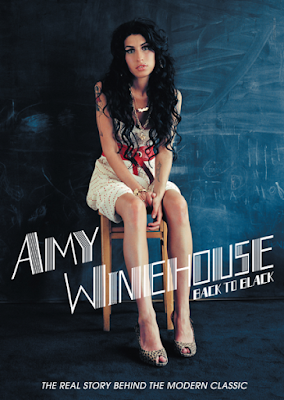 With the Grammys less than a week old, it was the ideal time to look back at one of the biggest winners of the 2008 Grammys, Amy Winehouse's "Back To Black" album. In November, Eagle Vision released a brand new documentary on the making of this monumental album. This film will give more insight to her fans, since this was also the last album she created with her amazing talents. This new film features new interviews with producers Mark Ronson and Salaam Remi, as they guide you through the creative process of nearly every song on the album.

What many of you may not know is how great of a songwriter Amy Winehouse was. She had the lyrics and melody to most of the songs on the album already prepared, as the documentary shows footage of her with an acoustic guitar running through many of the song's main structures. As you watch the film, Ronson and Remi give you some treasured information into what may have turned a good song into a great song. The addition of The Dap-Kings melody on songs like "Back To Black" and "Rehab" gave Amy that sixties, girl-group, jazzy-vibe that she was looking for. It even grabbed the attention of Ronnie Spector, who gave praise to Winehouse for carrying the touch of that style of music. The highlight of this documentary, is of course the unseen footage of Amy Winehouse in the studio, as she creates one of the finest albums of the past 20 years.
A stellar bonus on this DVD is a previously unreleased intimate live performance by Amy Winehouse. It was filmed on the same night as the 2008 Grammy awards. Since Amy was not allowed entrance into the U.S. because of her drug addiction, she instead held a performance in London, for only a small group of family and friends. The eight-song set was professionally recorded and showcases Amy at the top of her game, as she leads the band through gems like "Tears Dry On Their Own" and "Hey Little Rich Girl." The highlight of her performance has to be the unrehearsed run through the classic "A Message To You Rudy," as the band is following her every lead. So do yourself a favor and make sure to check out the new documentary "Amy Winehouse - Back To Black: The Real Story Behind The Modern Classic." For more information on this new release, please visit eagle-rock.com.
Posted by JP's Music Blog