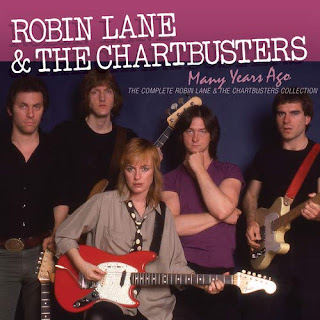 Arriving March 1st via the Blixa Sounds music label is the complete album retrospective of the eighties rock band, Robin Lane & The Chartbusters. Robin Lane began her solo career as a member of the California folk scene in the late '60s and early seventies. Her early claim to fame was her collaboration with Neil Young on his album "Everybody Knows This Is Nowhere." After moving to the east coast, Lane helped form her new band The Chartbusters and became a concert staple around New England. The band released their first studio album ("Robin Lane & The Chartbusters") in 1980, which featured the band's biggest hit single "When Things Go Wrong." Their sound was a combination of Patti Smith vocals with a Tom Petty & The Heartbreakers rock groove.

The new release titled "Many Years Ago: The Complete Robin Lane & The Chartbusters Collection" features three discs filled with the band's four official releases (two full albums & two EPs). Also included are loads of demos, outtakes and session work, including and entire discs of live performances. The first disc is a duplicate the band's first two albums, "Robin Lane & The Chartbusters" and "Imitation Life." Their sound is consistent throughout both albums with the up-tempo songs "Don't Cry," "Many Years Ago," "No Control" and "Solid Rock."
Disc two is where we begin to dive into the treasure of unreleased music with 11 of the discs 19 tracks having never been previously issued on any other compilation. We begin this disc with the 1984 EP "Heart Connection," which was the last release by the band before Lane parted ways to work on a family and her solo career. As the original release included only four songs, another seven tracks were recorded during the sessions for that album, but were never released. As you listen to these other songs from the sessions, you can only wonder why they were not released, with great songs like "Look The Other Way" and "Take Back The Night." Robin Lane & The Chartbusters certainly had their sound geared toward the pulse of rock/pop music in the eighties. The second disc wraps up with a trio of early singles from 1979 and some even earlier demos that showcase Robin searching for a direction for her music.
Disc three is where all of the unreleased live music lies. The first five songs were featured on the band's "Live EP," originally released in 1980, following the success of their debut album. The rest of the disc is made up of previously unreleased live performances. This includes some in-studio radio shows and club shows as the quality is perfect. They mix in a few covers with the band's original work, as their live sound mirrored that of their studio albums. To find out more about this new compilation "Many Years Ago: The Complete Robin Lane & The Chartbusters Collection," please visit blixa.com.
Posted by JP's Music Blog