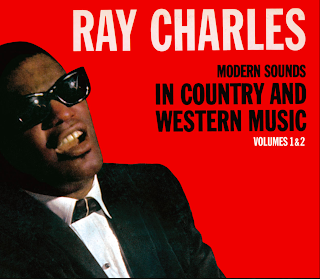 Back in 1962, Ray Charles topped the album charts with his album "Modern Sounds In Country And Western Music." The album featured a dozen traditional country anthems, which Ray Charles turned into exceptional jazz numbers. Charles quickly followed the success of this album with a second volume of "Modern Sounds In Country And Western Music." It reached number 2 on the album chart and included another dozen tracks that Charles added his own flair to. Now on February 22nd, Concord Records is preparing to re-issue these two albums on CD and vinyl for the first time since 2012.

Highlights from "Modern Sounds In Country And Western Music, Vol. 1" include the swinging opening track "Bye Bye Love" and the thumping rhythm of "Just A Little Lovin'." His heartfelt versions of "Born To Lose" and "Worried Mind" showcases the vulnerability that Ray Charles portrayed in his music, while "I Can't Stop Loving You" has become one of the key staples in Charles extensive catalog.
Ray Charles version of "You Are My Sunshine" is delivered with a sultry funk groove that is unmatched by any other cover of this song. Volume 2 of this set of country and western classics may not feature as many well-known songs, but highlights include the gospel-like rendition of "Take These Chains From My Heart" and the emotion-filled "Making Believe." To find out more about this new re-issue of these two classic Ray Charles albums, please visit concord.com.
Posted by JP's Music Blog