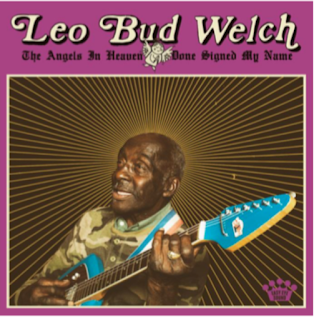 Blues artist Leo "Bud" Welch released his first album, "Sabougla Voices" in 2014 at the rip age of 82. He quickly followed that up in 2015 with "I Don't Prefer No Blues," as the world took notice of this 80-year old artist singing about the blues. These albums brought Welch on a world tour, which was chronicled in the award-winning documentary "Late Blossom Blues." Welch passed away in December 2017, at the age of 85, but still had one album already recorded to be released posthumously.

On March 8th, the final word on Leo "Bud" Welch's musical career will be released via Easy Eye Sound. Black Keys front man, Dan Auerbach took on the challenge of producing this new 10-song release titled "The Angels In Heaven Have Done Signed My Name." Auerbach said that "working with Bud was a true blessing," as his singing and guitar playing was as "steady as a rock." Dan also lends a hand to the recording wherever it was needed, whether it was playing drums or rhythm guitar, but Welch's vocals and lead guitar become the true star of the show.
Beginning with "I Know That I Been Changed," you can hear the plea in Welch's voice, as if it was his last rites before leaving this world behind. The tempo picks up with the gospel swing of "Jesus Is On The Mainline" and "I Come To Praise His Name," as you will surely become a follow of the word of Leo "Bud" Welch. The slow, dirty blues of "Walk With Me" and "I Want To Be At The Meeting" are the perfect setting for Welch's aged and experienced voice. The album wraps up with the classic stomp blues glory of "Let It Shine" and the short, simply and emotional "Sweet Home." To find out more about the legacy of Leo "Bud" Welch and his latest release "The Angels In Heaven Have Done Signed My Name," please visit facebook.com/leobud.welch.
Posted by JP's Music Blog