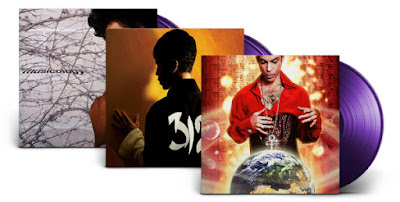 Back on February 8th, Prince fans rejoiced with the release of three of his albums appearing on purple vinyl for the very first time. The albums "Musicology," "3121" and "Planet Earth" brought Prince back into the pop spotlight, after his ugly battle with his former record company, then journeying into jazz fusion and experimenting with club beats. Sony Legacy Recordings, in association with The Prince Estate, released this first wave of re-issues from the Prince catalog to showcase the companies new partnership.

The "Musicology" and "3121" albums are featured as double-vinyl sets, packed to the brim with music. Prince was never one to shy away from a musical genre, as he would tackle guitar driven rock with the same care as a beautiful R&B ballad. The "Planet Earth" album was originally released as a free giveaway with "The Mail On Sunday" UK national newspaper and includes Prince's final Grammy winning single "Future Baby Mama." All three albums reached the top 5 on the Billboard album charts and displayed a new life for Prince's music.
As you listen to these new vinyl releases, you will certainly appreciate all of the work that Prince put into his music, as perfection was definitely achieved. He handled most of the instrumentation on these albums, as well as delivering his reliable stellar vocals. Whether Prince was sweeping you off your feet with the delicate love of "Te Amo Corazon" or flexing his rock muscles with the blast of "Guitar," Prince knew how to bring all his sounds together and keep you drawn into his musical genius. These new vinyl versions of his albums offer a stellar clarity to these songs, as you will be able to dissect each instrument and vocal upon listening.
These vinyl versions are the new blueprint that all future Prince releases should follow. It is also the little things that will make Prince fans happy, like the flap-style artwork of "Musicology" (that mirrors the original CD release) or the holographic cover of "Planet Earth," which shows that these are not just simple re-issues, but deluxe new releases of this trio of classic Prince albums. To find out more about these three new outstanding purple vinyl albums from the Prince catalog, please visit princeestate.com.
Posted by JP's Music Blog