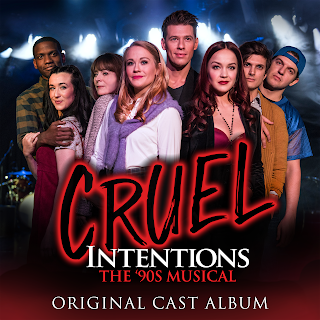 It has been twenty years since the original film, "Cruel Intentions" was released. It starred such well known actors and actresses as Reese Witherspoon, Ryan Phillipe, Sarah Michelle Gellar and Selma Blair. The movie was based off the the French novel "Les Liaisons Dangereuses," but modernized for 20th century New York.

The off-Broadway show "Cruel Intentions: The Musical" (based on the cult film) will begin a national tour at the end of March and to co-inside with that, ABKCO Music & Records is releasing an original cast soundtrack of the show. It features a jukebox of nineties hits sung by the cast with new orchestral rock arrangements. Beginning with Placebo's "Every You, Every Me," you are in for a journey back in time with these 18 hit songs. Many of these musical numbers feature dialog from the show as in "I'm The Only One" and "Genie In A Bottle," while others are almost perfect replicas of the originals like No Doubt's "Just A Girl" and Deep Blue Something's "Breakfast At Tiffany's." The act one finale, "Only Happy When It Rains" showcases the great vocal talents that this soundtrack boasts, as all these songs are iconic.
This new soundtrack closes with the powerful "Katheryn's Turn Medley," (which features the songs "Bitch" and "Losing My Religion") and grand finale of The Verve's "Bittersweet Symphony." For complete list of tour dates and to find out more about "Cruel Intentions: The Musical," please visit cruelmusical.com.
Posted by JP's Music Blog