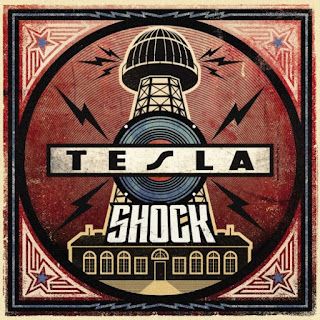 Arriving March 8th through Universal Music Enterprises is the brand new studio album from classic hard rockers, Tesla. Their new album "Shock" is packed to the brim with 13 tracks, beginning with the shuffle explosion of "You Won't Take Me Alive." The album was also produced by Def Leppard guitarist Phil Collen, who has been touring along side Tesla on and off for the past few years. So, he has been working with the band to deliver new music that all Tesla fans will be proud of. They re-use the blueprint for their hit "Love Song" on the new "We Can Rule The World," as Jeff Keith's rough vocals are the perfect home for this inspirational track.

The album continues with the pulsating beat of the title-song "Shock," highlighted by a sonic blast during the chorus and is filled with the dual guitar attack of Frank Hannon and Dave Rude. The ballad "Forever Loving You" and the slow build-up of "The Mission" showcase the softer side of Tesla's music, before blazing a trail of hard rock with the electrifying "Tied To The Tracks." Tesla finish up their new album with the adrenaline-fueled arena anthem "I Want Everything" and the pounding rhythm of "Comfort Zone" supplied by drummer Troy Luccketta and bassist Brian Wheat.
Tesla will be hitting the road at the end of the month for a tour of the U.S. before heading up to Canada in July. For a complete list of shows and to find out more about their amazing new album "Shock," please visit teslatheband.com.
Posted by JP's Music Blog