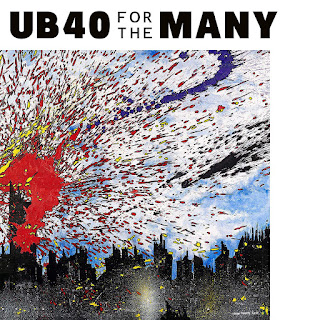 The English reggae/pop band UB40 are preparing to release their first album of new music in over five years. The new release titled "For The Many," is the band's 19th studio album and also features a load of special guests. UB40 may be best known in the U.S. for their number one singles "Red Red Wine" and "( I Can't Help) Falling In Love With You."

The new album kicks off with the upbeat, reggae vibe of "The Keeper," as their music still feels timeless. The band slow the rhythm down, but let the horns take over on "Broken Man," which features contributions from reggae singer, Kabaka Pyramid. It's time to hop aboard the "Gravy Train," as you feel transported to the islands of the Caribbean with the song's laid back vibe. The album's lead single "Moonlight Lover" is a fun piece of music as UB40 invite fellow Birmingham reggae artist Gilly G. to swap lyrics. The album finishes with the light-hearted island vibe of "Poor Fool" and the more emotional tone of "All We Do Is Cry," which features British/Asian pop artist Hunterz.
UB40 are celebrating their 40th anniversary this year with a huge European/U.S. tour this spring and summer. The are heading out on the road on March 23rd, before hitting the U.S. in August. For a complete list of shows and to find out more about their new album "For The Many," please visit ub40.global.
Posted by JP's Music Blog