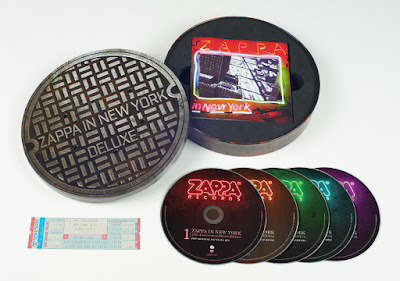 Back in 1976, Frank Zappa and his band performed four sold-out shows at The Palladium in New York City. The shows were recorded for a possible live album, which ended up being released two years later in 1978 as "Zappa In New York." In the last 40 years, it has become one of Frank Zappa's most beloved albums, and to celebrate it's anniversary, the original "Zappa In New York" album is being newly remastered from the original mix for a new release on March 29th. The album will be available through Zappa Records/UMe, as part of a new 5-disc deluxe box set, as well as a 3LP set and also digitally.

This new 5-disc collection comes in a limited edition round metal tin, shaped-like a New York City manhole cover with "Zappa In New York Deluxe" embossed on the lid. The insides include a new 60-page booklet filled with everything you every wanted to know about the performances. Essays and liner notes by Ray White, Joe Travers with Jen Jewel Brown and Ruth Komanoff Underwood, along with new, never-before seen photos of the performance grace the pages. Also included is a replica of a ticket from the event, along with each of the five discs housed in its own cardboard sleeve.
The first disc features the entire original 1977 vinyl mix of the "Zappa In New York" album, which sounds perfect. From Frank leading the band through "Black Page #2," to the wonderful jams of "The Illinois Enema Bandit" and "The Purple Lagoon," it will certainly bring you back to this classic period in Frank Zappa's illustrious career.

Now, discs 2-4 are made up of 33 previously unreleased live tracks pulled from the Zappa archives and newly remastered by Bob Ludwig for this special collection. While the entire shows are not present, the best version of each composition from that famous four-night run is here is stellar quality. Zappa classics like "Peaches En Regalia," "The Torture Never Stops" and "Montana" are present, along side alternate versions of songs that were originally released on the "Zappa In New York" album. Other highlights include the story of "Punky's Whips," the funky-fueled "I Am The Slime" and a 28-minute version of "Black Napkins" that sees the band firing on all cylinders.
The fifth disc in this set includes seven "bonus vault content" performances, like solo piano versions of "The Black Page #1" and "The Black Page #2," along with an original 1977 studio mix of "Crusin' For Burgers." This new deluxe edition of "Zappa In New York" has everything to whet the appetite of even the most die hard of Zappa fans, with over three hours of unreleased material for your listening pleasure. Fans new and old can now dissect and discuss even more of Zappa's material and will certainly make us wonder what else lies in the Frank Zappa vault for future releases from Zappa Records. To find out more about this new 40th anniversary edition of "Zappa In New York," please visit zappa.com.
Posted by JP's Music Blog