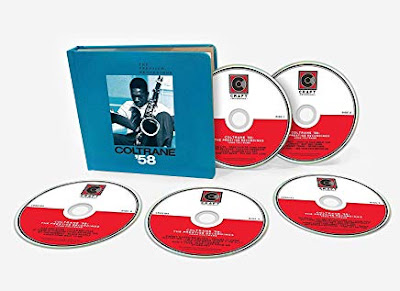 Legendary jazz saxophonist, John Coltrane had a very short solo career (1957-1967). He began his musical adventure only ten years before that and performed along side such jazz greats as Charlie Parker, Dizzy Gillespie, Thelonious Monk and Miles Davis. Coltrane's sound during the mid-fifties was unlike anything else in jazz music at the time. After recording the string of Davis' albums, "Cookin'," "Relaxin'," "Steamin'" and "Workin'," for Prestige Records, Coltrane worked on his first solo albums for the label. In 1957 and 1958, Coltrane recorded a flurry of songs for what would end up becoming his first solo albums, "Coltrane," "Dakar" and "Blue Train."

In 2019, the Prestige label celebrates its 70th anniversary, and what better way to kick off the celebration, than with a release of one of the label's premier artists, John Coltrane. On March 29th, Craft Recordings released a new box set titled "Coltrane '58: The Prestige Recordings." It features 37 recordings that Coltrane made for the Prestige label in 1958, before rejoining Miles Davis. This new 5-CD or 8-LP box set brings together some of Coltrane's earliest work as a band leader. All of the tracks were remastered from the original analog tapes, in order to be given the best quality sound available.
The set begins with the extended jams of such standards as "Lush Life" and "Come Rain Or Come Shine," as Coltrane's sax leads the way. Also early on in the set are some of the songs that were used for his album "Soultrane," like the wildly energetic "Russian Lullaby" and the bluesy feel of "Theme For Ernie." John Coltrane had no trouble capturing your attention, whether is was with the energy of "Freight Trane" or the delicate touch of "I See Your Face Before Me." As you listen to these songs, you get a sense that Coltrane was on the verge of stardom. Songs like "Rise 'N' Shine," "Black Pearls" and "Lover Come Back To Me" are perfect examples of how well Coltrane led his group of musicians. He also knows how to make such classics like "Spring Is Here" and "Stardust" all his own, by putting the listener in the perfect frame of mind with his sound.
As you make your way through these outstanding recordings, be thankful that such classic jazz pieces like these are still around and are still relevant in today's musical world. This set comes in a beautiful linen-wrapped, portfolio-style book with each disc housed in its own sleeve, along with a 40 booklet that contains many rare photographs and new line notes from music historian Ashley Kahn. To find out more about "Coltrane '58: The Prestige Recordings," please visit concord.com.
Posted by JP's Music Blog