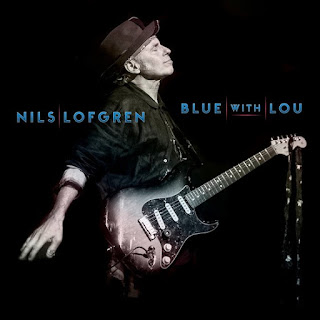 Singer, songwriter, guitarist Nils Lofgren has been working on and off for the last twenty years as a member of Bruce Springsteen's E Street Band. During this time, he managed to write and record a few solo albums, and in 2014 released a career-spanning box set titled "Face The Music." Now on April 26th, Nils Lofgren will release his first new studio album in eight years titled "Blue With Lou." The title comes from the time Nils' spent with the legendary Lou Reed, dating back over forty years ago. While some of the songs on this new album have appeared on other releases from Nils and Lou Reed, Nils decided to revisit these songs and breathe new life into them.

The new 12-song set begins with the energetic rhythm of "Attitude City" and guitar-boogie of "Give," which were both captured live in the studio. Nils seems renewed by this idea of recording many of these songs that have been left unheard, until now. Nils finds inspiration from his former band leader on the Springsteen-sounding "Pretty Soon," before guest Branford Marsalis lends a hand on the Reed-Lofgren composition "City Lights." Nils gets down and dirty with the southern swing of "Blue With Lou," before finishing his new album with the guitar swagger of "Dear Heartbreaker" (a tribute to Tom Petty) and the emotional words of the closing ballad "Remember You."
Following the release of his new album, Nils Lofgren will be hitting the road for a month-long tour starting May 10th, For a complete list of shows and to find out more about his new album "Blue With Lou," please visit nilslofgren.com.
Posted by JP's Music Blog