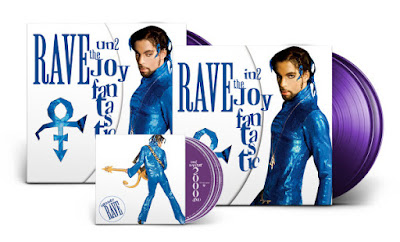 For the first time on vinyl since its original release comes the 1999 Prince album "Rave Un2 The Joy Fantastic" and its counterpart "Rave In2 The Joy Fantastic." Both albums will be released on April 26th through the Prince Estate and Legacy Recordings, as purple double-vinyl sets and as a 3-disc "Ultimate Rave" set. The "Ultimate Rave" set brings together both albums on CD along with a previously unreleased version of Prince's paid-per-view concert "Prince In Concert: Rave Un2 The Year 2000."

While both albums have been out of print for over a decade, this release marks the very first time that the remix album, "Rave In2 The Joy Fantastic" has ever appeared on vinyl. This album's original release signaled Prince's return to pop music, with the intention of taking over the singles charts with the help of some special guests like Sheryl Crow, Gwen Stefani and Eve. Only one single was officially released, "The Greatest Romance Ever Sold," as the album received mixed reviews. Prince quickly followed this up with a remix of the album ("Rave In2 The Joy Fantastic"), featuring extended versions to many of the songs from the original album, along with a brand new track, "Beautiful Strange."
First of all, I can't say enough as to how good the purple vinyl looks, as Legacy Recordings continues to roll out these latter-day Prince albums on vinyl. The sound of the "Rave Un2 The Joy Fantastic" vinyl is very good, not overly loud, so don't be afraid to turn up the volume and rock out to "So Far, So Pleased" or get down and groove to the soulful ballad "Man 'O' War." I believe that this is a straight re-issue of the original album without any remastering done. Another good thing about this new vinyl release, is that it also includes the two hidden bonus tracks, "1-800-Newfunk Ad" and "Prettyman."
The new vinyl edition of "Rave In2 The Joy Fantastic" sounds even better, as the remixes of "Undisputed" and "Hot Wit U" will make your speakers work with the music's pounding dance beats. This album also included some of the same tracks that are on "Rave Un2 The Joy Fantastic," like "Tangerine" and "Eye Love You, But Eye Don't Trust You Anymore," which sound better on this album, next to the over-produced remixes. To find out more about this latest wave of releases from the Prince Estate, please visit legacyrecordings.com.
Posted by JP's Music Blog