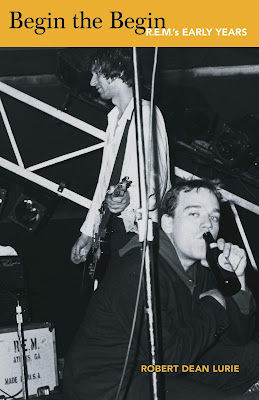 Author Robert Dean Lurie is one of the latest writers to dive into the early days of the Athens, GA band, R.E.M. with the new book "Begin The Begin." The advantage that Robert has, is that he knows the area and the lore of how the band formed, back in the late 1970s. The beginning of the legacy is when Bill Berry meet Mike Mills in high school, before attending the University of Georgia together, kind of like when John Lennon met Paul McCartney, and they say the rest is history. Well, this book examines that history.

The book talks about the early inspiration of bands like the Pythons and the B-52's, that seemed to help light up the path for R.E.M. to follow. The art department at the University of Georgia was ground-zero for the early days of R.E.M., where Berry and Mills have met Michael Stipe. After diving in to Stipe's history, the book continues with the addition of Peter Buck, but R.E.M. would still be a year removed from performing their first gig together.
Lurie does a great job gathering as much information as possible about what was happening in the Athens music scene in the early eighties. R.E.M. would become regulars in this music scene during 1980's and their early punk rock sound were the perfect soundtrack for adrenaline-fueled frat houses. The book moves along at a great pace, diving into the band's first EP, while growing their fanbase one show at a time.
The book dives into specifics about the band's performances around Georgia as their popularity continued to grow, before entering the studio to record songs that would make their way on to their first full-length studio album. Also included in the book are a bunch of rare b&w photos and promotional items that help shape the history of R.E.M. Robert Dean Lurie's story would finish with R.E.M. releasing their first set of albums on the I.R.S. Records label, before joining Warner Bros. Records in 1987, while ruling the airwaves of college radio. The band's biggest days were still ahead of them, as R.E.M. already felt like champions. To find out more about the new "Begin The Begin" book, please visit robertdeanlurie.com.
Posted by JP's Music Blog