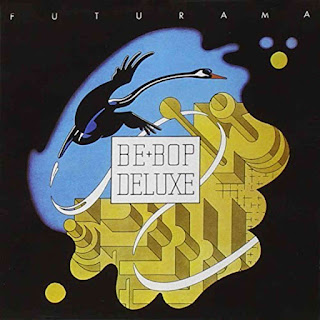 On May 3rd, Esoteric Recordings will be releasing a new 4-disc limited edition box set of Be-Bop Deluxe's 1975 album "Futurama." This new set includes 3 CDs and a DVD featuring an entire previously unreleased concert from May 23, 1975 recorded for BBC Radio One. The first disc contains the original "Futurama" album, newly remastered from the original master tapes, along with the two bonus tracks, "Between The Worlds" (single version) and "Lights" (not featured on the original release).

The second disc features a brand new stereo mix of the album, which sounds amazing (especially with headphones). Songs like "Love With The Madman" and "Sister Seagull" almost have a 3-D effect to the music as you can hear the depth of the instruments. This disc also includes two previously unreleased bonus tracks, a studio outtake of "Music In Dreamland," and an alternate studio version of "Between The Worlds."
The third CD and the DVD is where long-time fans with want to dive into, as it contains live versions of songs from the album, as well as a 5.1 surround mix of "Futurama." The previously unreleased BBC Radio One "In Concert" that was mentioned early takes up the majority of third CD. The show sounds great, professionally recorded and showcases the band's talents for interpreting the music live. Highlights include a six-minute version of "Adventures Of Yorkshire Landscape" and the bluesy swing of "Piece Of Mine."
The DVD not only includes a newly created 5.1 surround sound mix of the album, but also a couple of songs performed on the BBC TV show "Old Grey Whistle Test," as well as a promo video for "Maid In Heaven." To find out more about this new limited edition box set of "Futurama" from Be-Bop Deluxe, please visit cherryred.co.uk.
Posted by JP's Music Blog