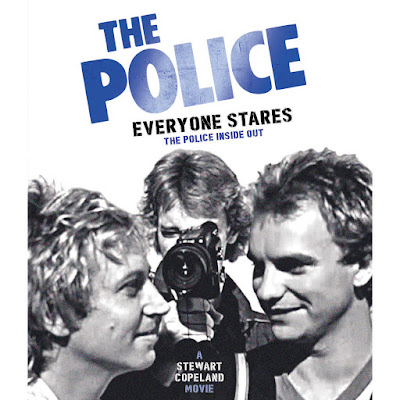 On May 31st, Eagle Vision will release a new documentary on The Police that has been decades in the making. The new film titled "Everyone Stares: The Police Inside Out" is a unique first-person view to the band's rise of stardom through the eyes and words of The Police drummer, Stewart Copeland. This 74-minute piece uses tons of archival footage and raw home video footage that Copeland shot with his camcorder, while Copeland also tells us his story of rise in popularity of The Police, in his own words.

Its great seeing a young Sting, Andy Summers and Stewart Copeland make their way across the U.S. for the first time in 1978. The Police seem to be having so much fun in the early days, like three friends on the vacation of the lifetime. Watching all this rare live footage, only makes me wish that there was an accompanying soundtrack to go with this documentary of some classic live music from The Police.
It seems like in no time at all that The Police quickly rose from an opening act to headliners, as the audiences continued to grow all over the world. Highlights of the documentary for me, include seeing rare footage of The Police working together in the recording studio and how relaxed they seemed to be in this environment. Copeland's monotone, spoken-word descriptions allow you to focus on the visuals, as he provides input to each situation to the best of his recollection.
As The Police finally reached the top of the hill of success, the band disbanded and each member went their own direction, but at least we have this footage of what it was like during those eight glorious years together. To find out more about the newly released documentary, "Everybody Stares: The Police Inside Out," please visit eagle-rock.com/the-police.
Posted by JP's Music Blog