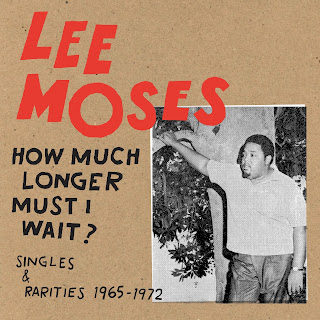 Arriving May 24th from Light In The Attic Records is the new rarities and singles collection from American R&B singer/guitarist, Lee Moses. This new release titled "How Much Longer Must I Wait? Singles & Rarities 1965-1972" features sixteen tracks that center around Lee Moses' short career. Each single in this new compilation is paired with it's non-album B-side, beginning with the soulful, burning blues of "My Adorable One" and the R&B groove of "Diane (From N.Y.C.)."

His guitar work, which was admired by a fellow club artist at the time, named Jimi Hendrix, takes center stage on Lee's covers of The Four Tops' "Reach Out I'll Be There" and The Beatles' "Day Tripper." The pleading single "Bad Girl" failed to make a dent on the music charts, but proudly displays Lee's passion for performing. His rough vocals are undeniable on the ballads "You Are Too Much For The Human Heart" and "If Loving You Is A Crime (I'll Always Be Guilty)." Lee Moses released his last single "I Can't Take No Chances" in 1970, before giving up the music industry just a few years later.
Lee Moses would succumb to lung cancer in 1997. To find out more about this new release of some of his most well-known songs and rarities, please visit lightintheattic.net.
Posted by JP's Music Blog