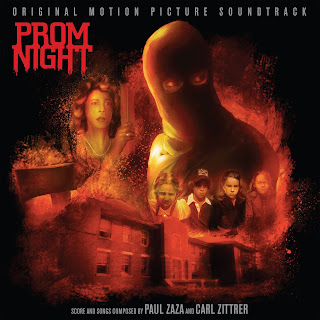 The 1980 film "Prom Night" starring Jamie Lee Curtis, has become a favorite cult film among horror fans. The film was made on a low budget of just over a million dollars and was deemed a success in the U.S., making over $15 million dollars upon its initial release. The film's soundtrack, composed by Paul Zaza and Carl Zittrer was just as loved as the film. The only problem was, that is was never released in stores in the U.S. It was only released in Japan on LP and cassette. Now after almost forty years, the U.S. get their own release of the soundtrack to the film "Prom Night."

It will be released on June 7th through Perseverance Records on CD only. It features the score and songs used in the film, along with an additional 21 bonus tracks of music that was recorded for the movie, but never used in the film. This new release is broken down into four segments, the first part features the original instrumental score used in the film. These eight songs give an eerie tone to the music that gave the scenes in the movie that extra shot of emotion.
Next are fourteen more pieces of instrumental music that has never been released, or even heard before, until now. Most of the songs are short snippets of music that are under a minute long, but were recorded, in case more theme music was needed for the film.
When the movie "Prom Night" was originally released in 1980, the U.S. was still going through it's disco phase, so the second half of this new soundtrack release features the songs that appeared in the movie. Songs like "Dancin' In The Moonlight" and "Changes" will remind you of the film's prom scene, while the songs "Fade To Black" that played during the end credits is also included. The final tracks on this new soundtrack are an additional six disco songs that were recorded for the film, but was never used. This newly released version of the "Prom Night" soundtrack features 34 tracks (many of them unreleased), so the old saying rings true, that "good things come to those who wait." To find out more about the new "Prom Night: Original 1980 Motion Picture Soundtrack," please visit mvdshop.com.
Posted by JP's Music Blog