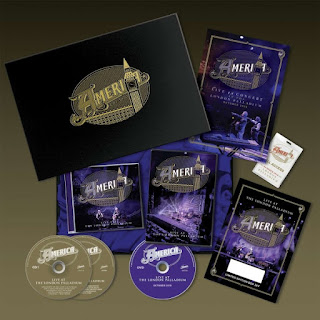 For 50 years, the British-American rock band, America have been entertaining audiences with such classic hits as "Tin Man," "Sister Goldenhair" and "Horse With No Name." In 2018, they recorded their concert at The Palladium in Worcester, MA for their latest release titled simply "Live At The Palladium." It showcases the band celebrating their anniversary by performing over twenty of the their most well-known songs like "You Can Do Magic" and "Daisy Jane."

The set is released as a double CD and DVD with a replica tour pass, 24-page full color booklet along with a numbered and signed certificate. America still sound amazing as they harmonize during the beautiful ballad "I Need You" and the California soft rock sound of "Ventura Highway." They can also still rock with the best of them, as displayed in "Cornwall Hollywood" and "Green House." America's strength still lies in the emotional harmonies of songs like "Only In Your Heart" and "Lonely People."
America has a bunch of live shows lined-up all throughout the summer. For a complete list of concert dates and to find out more about their latest release "Live At The Palladium," please visit venturahighway.com.
Posted by JP's Music Blog