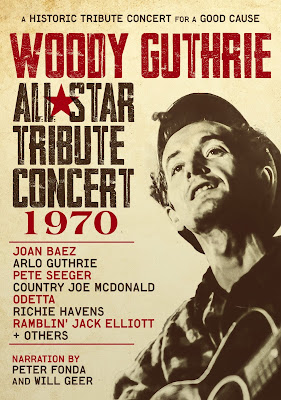 Woody Guthrie was an American folk artist, who sang about the revolution of the common man during the depression and onward. His catalog of songs have become the standards of folk music and his musical career lasted for four decades, before passing away at the age of 55 from Huntington's disease. To raise money for the California Chapter of The Committee to Combat Huntington's Disease, they held and all-star tribute concert in 1970 at the famous Hollywood Bowl. Some of the biggest names in folk music performed at this event, which was filmed, but never released on home video, until now.

On June 7th, MVDvisual will release the "Woody Guthrie All-Star Tribute Concert 1970" on DVD, along with some bonus material. The show features an amazing cast of musicians from Pete Seeger, Joan Baez and Arlo Guthrie to Odetta, Richie Havens and Ramblin' Jack Elliott. Each artist takes their place in the spotlight, performing one of Woody Guthrie's most well-known anthems for the working American.
In between the songs, actor Peter Fonda and Will Geer dictate the words of Woody Guthrie, while old black and white film footage help to explain what he was feeling when he wrote some of these songs. The real excitement is when whole group of artists gather around the microphones to sing some of Guthrie's most meaningful songs like "I've Got To Know," "This Land Is Your Land" and "This Train Is Bound For Glory."
The bonus material features new interviews with Arlo Guthrie and Ramblin' Jack Elliott about the significance of the concert. Also included are three performances not shown during the original broadcast of the show. To find out more about the newly released "Woody Guthrie All-Star Tribute Concert 1970," please visit mvdshop.com.
Posted by JP's Music Blog