Chick Corea Continues His Legendary Career With A New "Antidote" 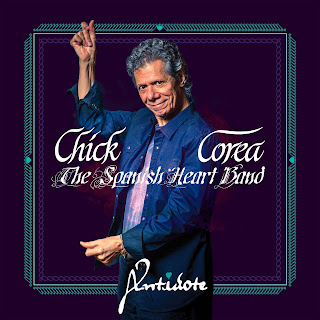 The album begins with the title-song "Antidote," a new track that Chick Corea specifically wrote for Blades to sing, as he does a magnificent job on the Latin flair of this nine-minute opener. Next, Corea expands upon the song "Duende" (from his "Touchtone" album), as the Spanish Heart Band add their signature sound on this ten-minute version of the song. Corea showcases his wonderful bandleader skills on "Yellow Nimbus Parts 1 & 2," with the band fully supporting his talents on keys. Gayle Moran Corea revisits her vocals on "My Spanish Heart," as the song has become more well-rounded compared to the 1976 original. Another track that benefited from being revisited is the nearly twelve minute flamenco masterpiece "Zyryab," before closing out the album with the Latin rhythm of "Admiration."
At 78 years old, Chick Corea is still out touring with shows lined-up in Hungary, Germany, France, Italy, United Kingdom, Switzerland, Spain and the Nertherlands, before coming back to the U.S. to perform. For a complete list of shows and to find out more about his new album "Antidote," please visit chickcorea.com.
Posted by JP's Music Blog