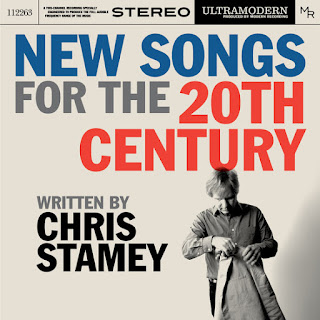 American songwriter, musician and producer Chris Stamey is preparing to release his new album titled "New Songs For The 20th Century." This album has been three years in the making as Stamey was inspired by the classic songs of Cole Porter, George and Ira Gershwin, Henry Mancini, Irving Berlin and Richard Rodgers to create these new modern standards. Chris Stamey wanted the songs to be recorded by some of the top musicians in the business and sung by some of his favorite vocalists.

This two-volume, two-disc set features twenty-six tracks, beginning with the velvet voice of Django Haskins singing the swinging sound of "Manhattan Melody (That's My New York)" and the sweeping ballad "It's Been A While." Chris Stamey does an amazing job matching the songs to the singers, like the innocent vocals of Kristen Lambert performing the lush ballads "What Is This Music That I Hear?" and "On An Evening Such As This."
Vocalist Millie McGuire is one of Stamey's favorite singers, as she appears five different times on this new release. Her stellar vocals grace the jazzy ballad "I Fall In Love So Easily" and the gentle flow of "Pretty Butterfly." Chris Stamey also brings together Marshall Crenshaw, Don Dixon and Django Haskins for the upbeat, gospel-like New Orleans-style jazz of "Beneath The Underdog," before Django Haskins goes solo once again on the showtune feel of "In-tox-i-cho-cli-fi-ca-tion." Millie McGuire duets with Prestce Baez on the beautiful waltz of "Unpredictiable," then Baez closes out the album with the bluesy tone of "Occasional Shivers (reprise)." To find out more about Chris Stamey and his latest release "New Songs For The 20th Century," please visit chrisstamey.com.
Posted by JP's Music Blog

Hi JP, thanks so much for shining a light on these great singers and players! so much appreciated--Chris